Kugels™ are the traditional choice for decorations in central Europe.  Each "kugel" is hand blown glass, and completely unique.
Kugels™ are displayed from interior arches, ceiling fixtures, curtain rods, Christmas Trees, holiday garland, hand railings, or wherever you like. 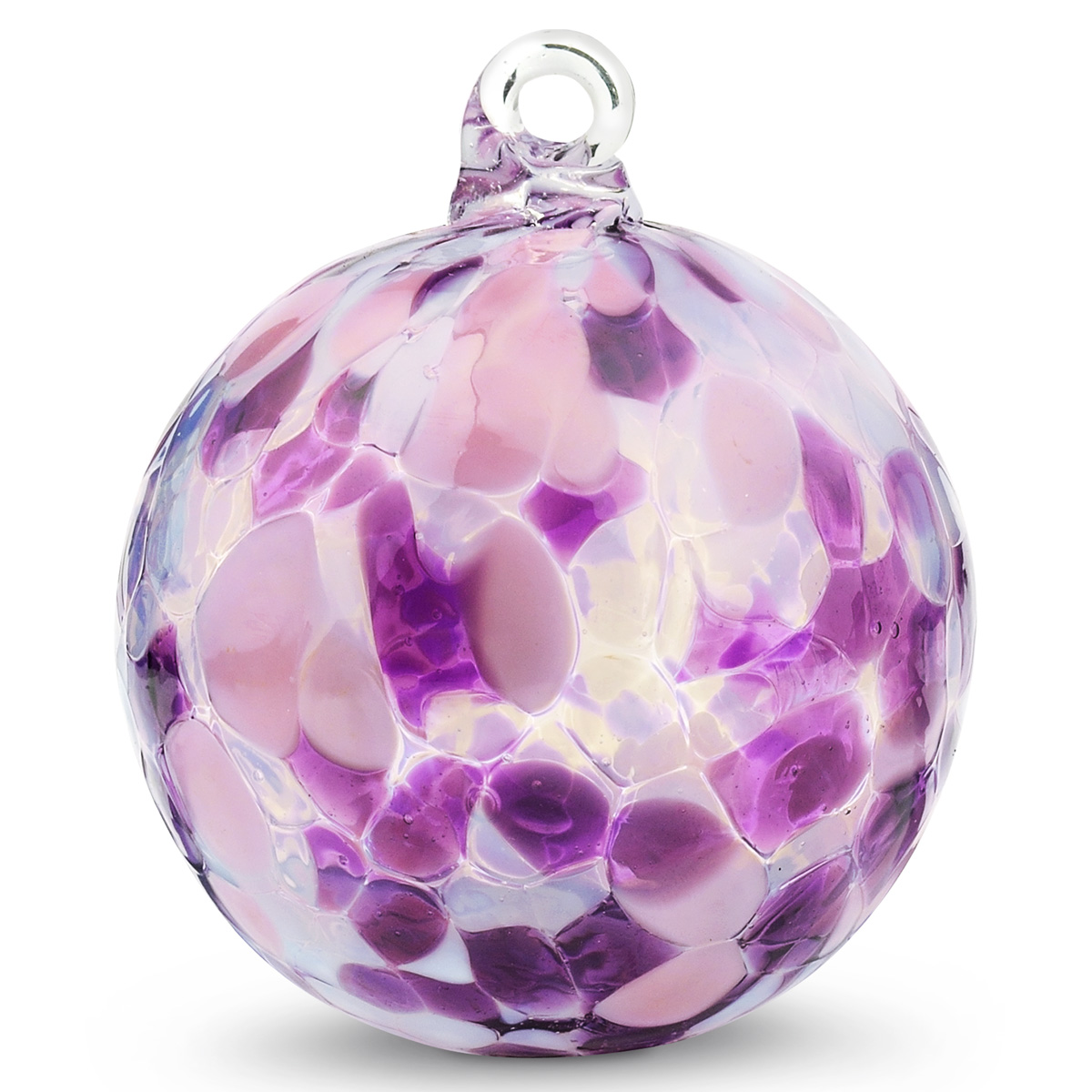 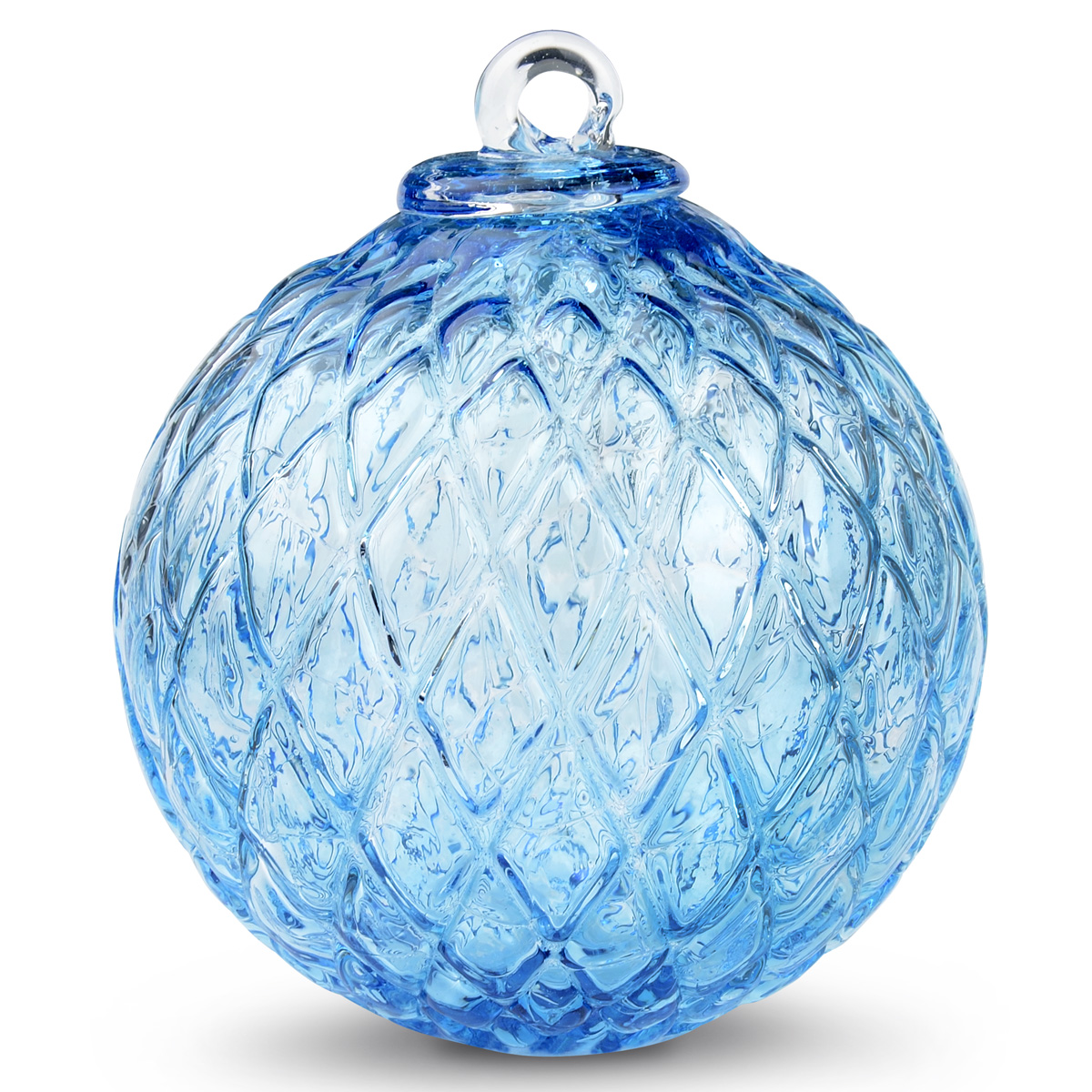 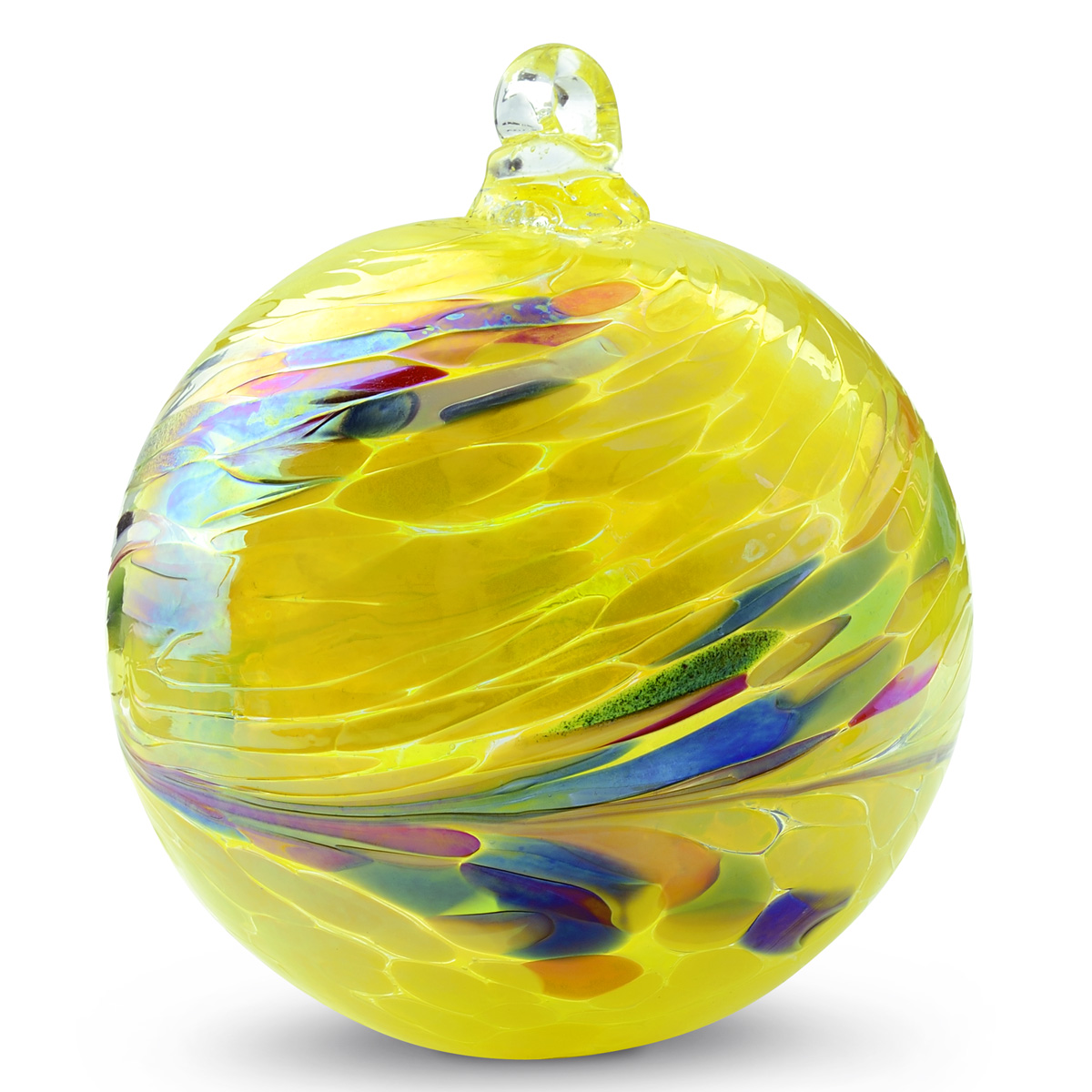 Holiday trees in 1840 were adorned with apples, gilded and natural fruits and nuts, cookies, popcorn and cranberries, as well as homemade paper items, candles, cornucopias, and presents. It was during this decade that the first commercially produced Christmas decorations appeared.  In 1848, the first glass ornament, a kugel, appeared in Germany.  The kugel was a large hollow ball ranging in size from 1 inch to 18 inches.  Smaller ones were used for tree decorations.  The blown, molded, figural glass ornaments that we are familiar with today evolved from the tradition of blowing kugels.  These ornaments were not sold in America until 1880.

Kugel™ is a German word that means "ball".  Collectors used this term to describe any early thick glass ornament with a decorative cap.  Early Kugels were too heavy to hang on tree branches; instead, they were suspended from the ceiling.  Soon after their invention, the Germans decided small Kugels should adorn tree boughs.  Shapes such as grapes, berry clusters, apples and pears became popular.

F. W. Woolworth is given credit for bringing Kugels™ to America in the 1880s.  His initial investment of $25 turned into sales of at least $25 million worth of Kugels over the next several years. The lamp blown Kugels™ morphed into lighter, painted ornaments like we know today.

More....The first kugels were blown in Lauscha, Germany as early as 1820. These were big and hung from ceilings in churches, schools, stores and homes. These had glass hangers pikes with corks and wax with a wire through the cork to hang from.

Smaller kugels were also kiln blown starting in the late 1840s. The brass caps started in the early 1850s. In 1859/1860 Kugels™ were first imported into America.

The 1860s also saw the first gas works in Lauscha (1867) and lighter weight early kugels were now also blown at the lamp. These are smaller (usually) and lighter than the kiln blown kugels. These were free blown and mold blown into pinecones and other shapes. Unlike later light-weight pieces, the color in kugels is always IN the glass, not painted on the glass.

Kugels™ were still made in the 1870s and 1880s but waned in popularity as the lamp glass ornaments got more detailed. Even though small 3/4" and 1" kugels were made for feather trees, people wanted the newer lighter weight, painted ornaments. The heavier kugels died out around 1910.

Around 1920 the French started blowing kugels in a new variety of colors. The main company was Vergo Glass located outside of Nancy. Vergo pieces have VG1721 marked on top...which is when the glassmaker was founded. French pieces are much lighter than the older German pieces and have a more Art Deco cap design or a plain ribbed cap design. French Kugels ceased in the early 1930s.

Colors Most Common to Rarest:

European Art glass balls for holiday decoration are still commonly referred to in Austria and Germany as "Kugels".  Kugels range in shape and styles, according to the artist that made them and the season they are displayed.  It is quite common to display egg shaped kugels at Easter and Heart shapes at Valentines day.  Quality kugels are hand blown or mouth blown art glass.  Most are blown into a apple wood mold to retain shape and consistency.  Some artists free blow their kugel designs, thus ending up in an irregular shape.  Air bubbles are common, and expected by the collector.

In America these glass balls are marketed in many ways.  Witch balls, spirit balls, spirit catchers, friendship balls, gazing balls, wishing balls, and so on.  Each having a little bit of home grown folklore attached to make the item unique or extra special.

IN YOUR GARDEN OR POND

Our blown glass balls are sealed air tight and therefore serve as beautiful accents floating on the surface of any water garden.  They have the added advantage of offering a hook, which can be used to drop a line anchoring the ball.  Without an anchor, free floating pond balls will cluster in one corner of the pond, but if weighted, our balls stay aesthetically placed.  We recommend the use of non-lead weights because lead could poison pond fish.

Floating glass balls may even protect your pond fish from predators.  Folklore suggests that raccoons are frightened by the shiny surface of the balls and will stop poaching your pond pets.

Add other splashes of color to your garden by hanging our blown glass balls from trees or on garden hooks.  They will withstand most weather conditions, as long as they can't swing and bump into a hard surface

Gazing balls have as varied and colorful a history as they are themselves.  The first recorded history of these hand-blown glass garden accents dates back to the 13th century where they were made in Venice.  In 1612 an Italian priest, Antonio Neri, named them "Spheres of Light".  They have been known by many names - Gazing Globes, Rose Balls, Good Luck Balls, Victorian Balls, Witch Balls, and Garden Globes.  Also called "Globes of Happiness", they have been used symbolically as wedding gifts - said to bring the bride happiness in her new home.  In the 16th century Francis Bacon stated that a proper garden would have round colored balls for the sun to play upon.  They gained their current widespread popularity during Victorian times, being used both
indoors as well as in the garden.  One interior use was in dining rooms and on sideboards.  Placed in such a way, the servant could gaze discreetly into the ball and see who may need a refill without standing and staring throughout the meal.

Commonly they are known to fend off misfortune, illness and evil, and to bestow happiness to the owner.  The original Victorian Gazing Balls were small (4 inches) hanging balls of either gold or blue glass.  They were hung in the front room windows to repel witches the belief being the witch would see her reflection, and being repulsed by it, would leave.

A collection of lore from different sources includes the following:

Place the ball close to the front door of a house so that if a witch comes calling, she will see her reflection in the ball and stay there to stare at herself.

Called "Garden Gazers" in the South, they were placed at the gate to the front yard so that those sitting on the porches could see who was coming, and have time to either go in and close the door, or go to prepare a glass of ice tea for the guest.

Used in Victorian gardens, a young woman would gaze into them in hopes to catch a glimpse of her future husband.

Based on 1 review Write a review